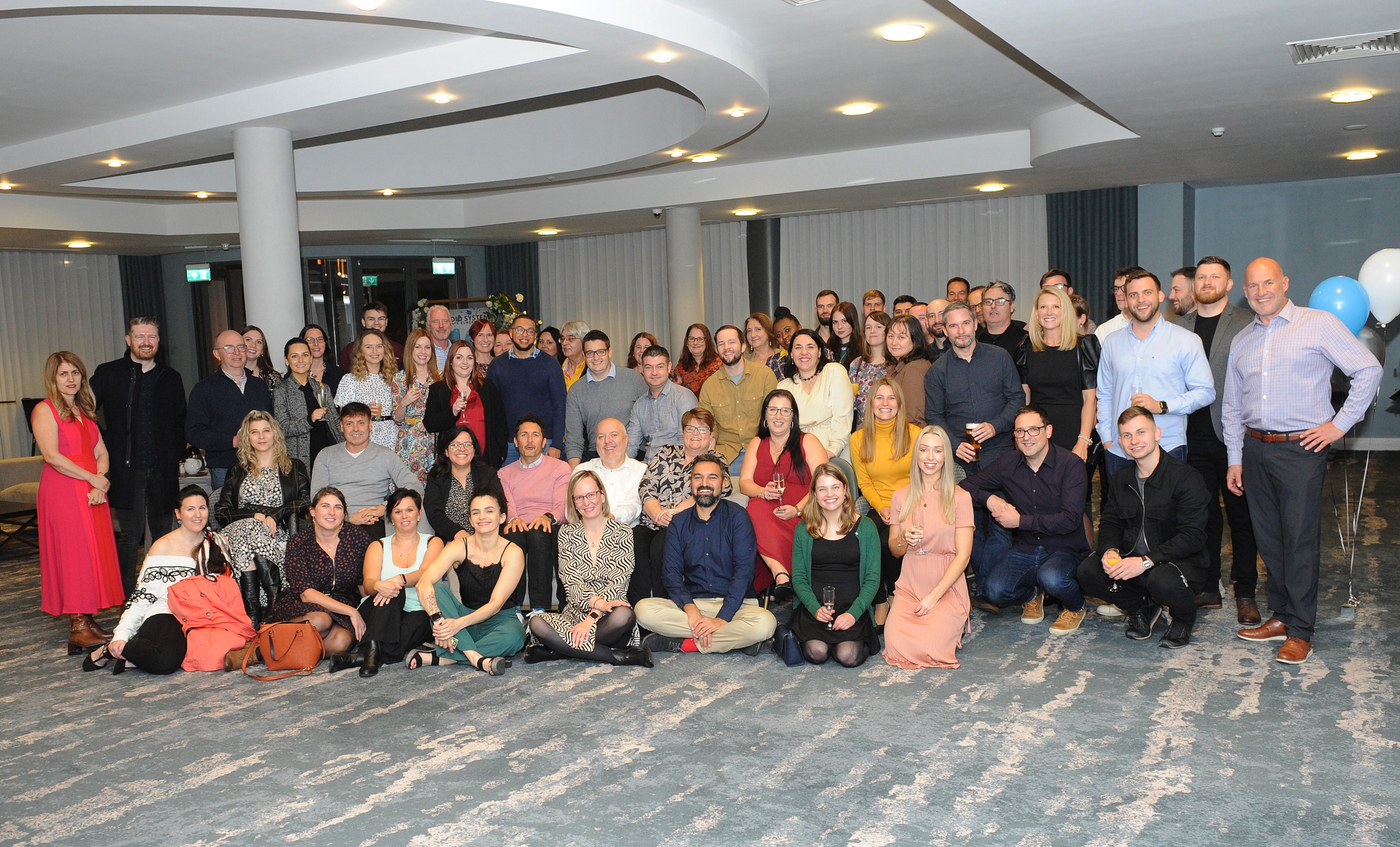 It’s ten years ago this month that Radio Systems PetSafe Europe Limited made Dundalk the home of its European headquarters. The company is a subsidiary of US-based Radio Systems Corporation; home of the PetSafe® brand.

Colleagues’ cultures are similarly shared through Independence Day barbecues and Bastille Day celebrations in July, German Unity Day in October and Thanksgiving in November – amongst many other multicultural traditions.

And it’s clearly an effective approach to take, proven by Radio Systems twice taking top spots in the prestigious list of Best Workplace in Ireland over the last five years, as well as ranking within Europe’s top three best employers in 2018.

From a somewhat modest beginning back in 2012, the Dundalk team has grown exponentially. It’s increased from just five colleagues and two dogs to a cohort of 65. Of these, 22 employees are Irish, and the rest are from across the globe – from Argentina to India, South Africa to Iran, and many other countries in between - working in the company’s multilingual customer services centre, finance, order management, supply chain, marketing and human resources departments - accompanied by their ten or so canine companions.

Their four-legged friends and the wellbeing benefits they bring have been welcomed to the workplace from the very start, long before it became the trend that it is today.

They also sometimes include foster dogs to socialise – as part of Radio Systems’ collaboration with Dundalk Dog Rescue – when the company’s employees volunteer and provide foster homes, giving unwanted dogs a second chance. This is just one of the many charitable efforts made by the Dundalk team. Others include taking part in the Vhi Women’s Mini Marathon in aid of Dundalk Dog Rescue, raising funds for Husky Rescue Ireland, colleagues participating in the 100k in 30 Days in aid of Breast Cancer Ireland, not to mention volunteering with Dundalk Soup Kitchen.

The team rapidly grew to 17 during its first year of operation and ten of the first employees to join PetSafe® brand Dundalk during its very early days have remained with the company ever since – testament to its culture and welcoming environment.

These include Hans Peeters, who has worked for Radio Systems in Dundalk for ten years. He moved to Ireland, from the Netherlands, in 2012 for a role with another company but saw opportunity with Radio Systems and has never looked back. A decade later, and he celebrates the company’s anniversary as well as his own 100% attendance during that time.

Another team member who’s marking the occasion on both a professional and personal level is Call Centre Manager Kurt Godfrey. Kurt helped enhance Radio Systems’ Customer Service facility in Dundalk on secondment from Radio Systems Corporations’ global headquarters in Knoxville, Tennessee. He arrived in the country on a 60-day temporary visa almost ten years ago to the day.

His remit was to help with the team’s staffing challenges as the company’s European base grew rapidly when it first opened its doors - 25 appointments were made in the first three months of operation. A veritable boomerang employee, he moved back to United States in 2014 and then returned to Ireland two years later, in 2016. In the meantime, in 2015, he married his wife Lauren – who he met whilst working in Radio Systems’ Irish office. They returned to live here, due to the Irish weather and “salt life” that he and his beloved Boxer dog, Arya, love.

Talking numbers - and in terms of commercial performance, during the last decade - Radio Systems in Dundalk has shipped $500 million USD worth of orders. That’s nearly 515million Euros or £452million in sales of innovative pet care products, including toys, travel accessories, training systems, water fountains and feeders and pet doors under the Radio Systems’ brands.

These include its PetSafe® brand, its SportDOG® brand of professional sport and hunting training gear and its Kurgo® brand portfolio of high-quality outdoor gear for active dogs and owners.

Dave Verdon, International VP at Radio Systems’ European headquarters in Dundalk, said: “We’re obviously delighted to mark such a marvellous milestone, and we’ve certainly got a lot to celebrate from the last ten years. But we continue to look forward at what the future has in store for us.

“Our global mission for Radio Systems is to build the most trusted pet brands. In Europe - and through our operations in Ireland – we’ll build on the foundations we’ve laid over the last 10 years, by continuing to grow our portfolio of brands and categories. In doing so, we’ll provide our customers with even more innovative pet 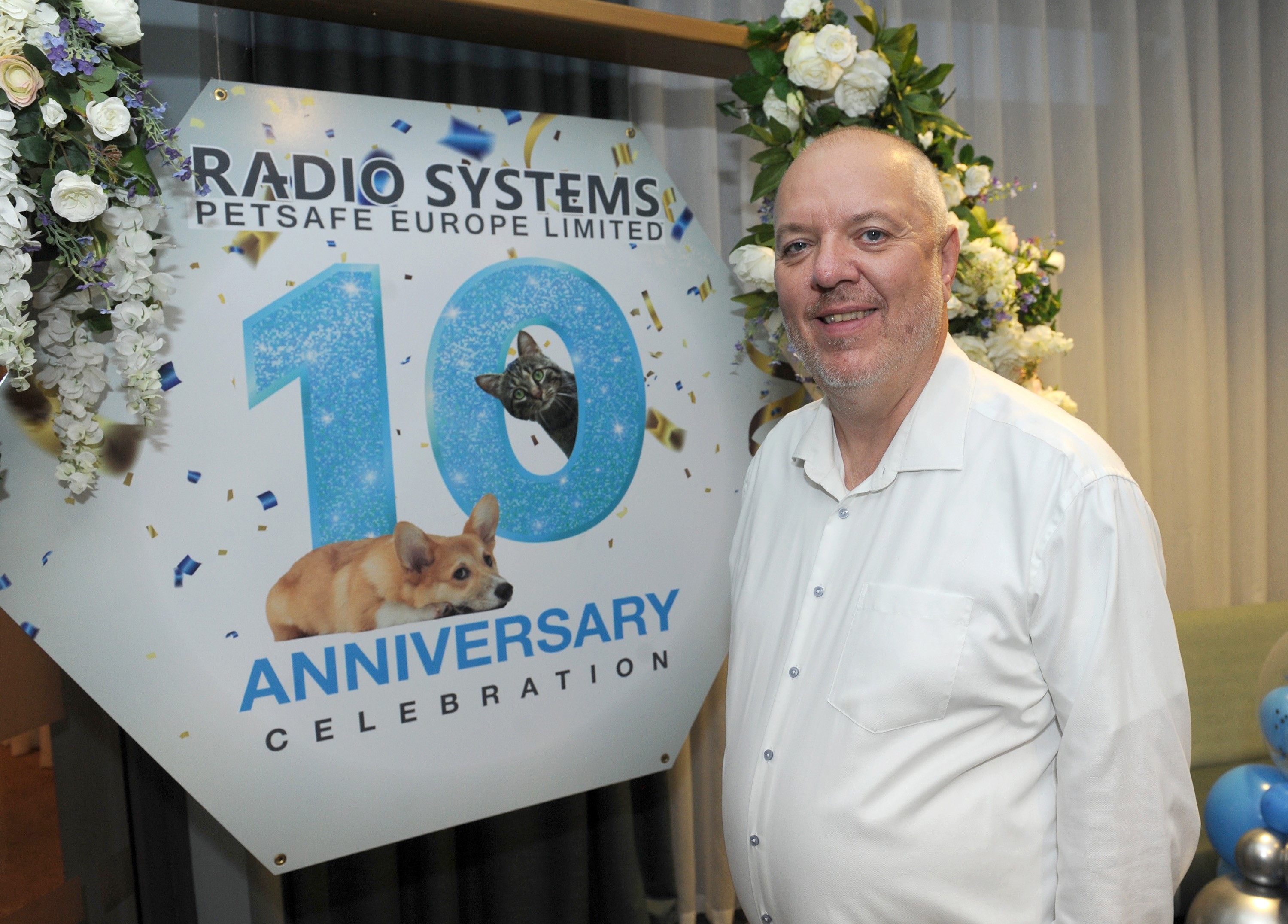 product solutions, wherever they shop - in pet store chains, smaller independents, online or direct from our websites across Europe.

“We will also continue to invest in our colleagues and communities, for the benefit of pets and their owners across Europe and the rest of the world. To do so most effectively, employee wellbeing is always a priority. Having colleagues who are healthy, happy and engaged has direct benefits on the customer service levels we provide, which underpin everything we do here at Radio Systems.

Our company ethos is to Love Thy Customer, and the best way we can stay true to this value is by creating the strongest company culture, founded on team autonomy, trust, respect, innovation and open and honest communication across all levels of the business. As a company of pet lovers, offering pet bereavement leave and employee wellbeing days, for example, are seemingly small touches but mean so very much to everyone.”

Such is its commitment to customer care that Radio Systems celebrates National Customer Service Week, each year, with special team breakfasts, ice creams and other treats, games and quizzes.

Rob Candelino joined the company following a 25-year tenure at international consumer goods company Unilever and will lead a new style of business, post-pandemic, which brings with it numerous opportunities and challenges.

Enhancements that have already been made to company software and websites, as well as technology advancements from a customer care perspective, as the company looks to improve its e-commerce offering using AI enabled chatbots to help boost customer satisfaction and sales. All of which will help build the strongest foundations for European growth during the next decade.